And the Chief Abbott spoke words of wisdom to the assembled masses.

“It will come to pass that Scott, the son of a Morris Dancer, will be appointed custodian of the Australian social conscience.” 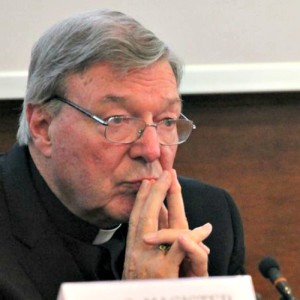 Not since the appointment of Cardinal George ‘for whom the Pell tolls’ to be God’s banker had such an important decision been announced.

Both men had careers that brilliantly prepared them for their appointments.  What better preparation for a banker then decades of hiding stuff from the congregation.

What better preparation for Social Services Minister than finding people from third world countries, another third world country to live in.  Scot had given Immigration a new direction (or should that be nude erection) in spite of stiff opposition.

First stop for the Minister was to meet his Department Heads.

“Don’t step on the carpet.  Don’t want your bleeding hearts to stain the rug.”

“We need a vision.  A goal for our department.  A grand expression of where we are taking this country.”

“Exactly a three word grand vision.  Problem is poor people don’t own boats.  I was thinking of ‘Stop the Dole’.  What do  you think?”

“Could be a problem Minister.  The Americans could get offended.  Remember they have Bob Dole in Congress.  Might be seen as un-American.  Last thing we would want is for them to see Australia being un-American.”

“Good point.  We are at a delicate stage of negotiations about the proposed US Naval Base at Nauru.  Before we came along to buy – sorry economically support – Nauru, they made their living selling bird shit.  Half the island has gone.  The Americans want to set up a base called Guano Bay.”

Let’s come back to the vision.  Who are these unemployed anyway?”

“We have a list of them.  It is sorted in order of the last company they worked for.”

“Let me see.  ABC, ABC, ABC, ABC, AFP, AFP, AFP, ATO, ATO, ATO.  Freeloaders, all of them.  Why should we pay good money to people who can’t hold down a job?  Maybe we should call our vision ‘Stop the Payments’.  If the press want to discuss it we say it is an ‘on water’ matter and cannot be discussed.”

“You know in Immigration I learnt something. You need to rebrand people. They are not ‘Asylum Seekers’. They are ‘Illegal Immigrants’. We need to do the same here before we cut their benefits. What if we call pensioners ‘Limited Birthdays Remaining, Liabilities’. After all, they can’t have too many birthdays left. If they get past 10 we are not doing our job properly. In any case, I strongly believe in Euthanasia. It should be legalised and in some cases, made compulsory.”

“That is a bit of a mouth full Minister.  Limited Birthdays Remaining Liabilities.”

“That is the point. We abbreviate it to LRBLs and soon everyone forgets we are talking about people. We can say and do whatever we want.”

‘The government today announced a strategic re-alignment of the outgoings for LRBLs which will save the country one billion dollars. Minister Morrison calls it an efficiency dividend that will lift productivity and reduce the Labor budget black hole.’

“Fantastic Minister. I also like your compulsory euthanasia. It would reduce aged care costs Minister.”

“Exactly.  Aged care.  Next thing you will have people demanding equality.  If we subsidise aged care, what about middle aged care?  What about care for the young?  You never know where dangerous thoughts like this can lead.  I can see the sense in supporting valuable people like retired doctors, lawyers and corporate leaders, but not the riff-raff.  The riff-raff never earned enough to be major tax contributors.  Those earning million dollar bonuses were potentially major tax contributors.  They were just smart enough to arrange their affairs so they paid less tax than the riff-raff.”

“We need to think laterally too.  If we can have self funded retirees, why not self funded unemployed?  Make them save up for the time they are unemployed.”

“What about those just starting in the workforce who can’t get a job Minister?”

“If they don’t have the self funding, they don’t get the luxury of being unemployed.  Let them do something useful like being a Financial Planner.  No training required for that.”

“Tricky that.  The Chief Abbott suffers from endorphin overload when he gets on his bike.  Completely blows his mind.  On one occasion he started blurting out a policy which was to give bike riders twelve months off on full pay to just pedal around.  Problem is he saw a pregnant woman in the crowd and got confused.  Think we need to do some relabeling.  Can we call them ‘Post Pregnant Work Units’?  It implies they should be back at work, not sipping Lattes all day for twelve months with a baby hanging off their breast.

A three word slogan could be ‘Stop the Sex’.  No sex, no pregnancy, no maternity leave.  If they become tempted, just think of the Julie Bishop death stare and everything will wilt.”

“I have some other ideas for cutting expenditure payments.  We halve the number of Centrelink offices.  We save on staff, and people cannot get their payments processed.  It is a win win situation.  We can also have a special pensioners levy which we tell them is for a year but never repeal it.  What do you think?”

“But Minister, there are not enough people in the ATO now to handle a new tax.  We cut so many staff they are estimating personal tax returns will not be processed for at least a decade.”

“Good point.  I might need to rethink that one.  Maybe we should outsource our tax office to Nauru.  I will talk to Smokin’ Joe about it.  He can hold talks over there.  They could stretch over a few months.  Joe has been looking for somewhere to hide”.

“So boys, this is the direction I want to take the department.  Welfare means we are ‘well’, and we don’t pay the ‘fare’.  If you are not contributing, there are plenty of empty places coming up in the offshore processing centres”.

“Bring us your sick, your unemployed, your disabled.  We will put them in an orange lifeboat and point them at Nauru.”