A few years back, my understanding of farmers did a U turn. I had never considered a major decision farmers have to make. In one or two sentences on radio, a farmer explained it. He was asked why he was growing cotton which was such a water intensive crop. The implication was clear. No environmental conscience. Raping the land.

His response completely threw me. This is the essence of what he said.

“We get a water allocation. You can argue about how big or small it is, but the government decides. All we want to do is to know with some certainty how much water we will get. Once we know that, we can make up our minds as to what is the most cost effective use to use the water. It might be cattle. It might be cotton. We have to decide that given a fixed amount of water, how can we make the most income by using our land to grow a certain crop, or run certain animals.”

In the city, most believe cotton is a crop that should not be grown in water starved Australia. The reality is, the government allocates the water, and the farmers use that water to maximise profits.

The simple response encapsulates capitalism. The government sets the rules, and capitalists generate as much profit as they can, within the rules. 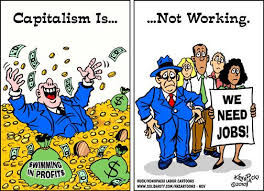 So what can we learn? The conservative side of government – be it Trump or Australia’s Liberals – says less government is good. Remove regulations and burn the red tape. Allow private enterprise to compete – “compete” being another word for cutting costs and benefits to employees in an attempt to make more profit.

Imagine these laws had never been passed. Would we still have slavery and child labour? Maybe, maybe not, but there would be some companies that would try. Even with today’s laws we hear of workers being underpaid by major franchises, and overseas girls being forced into slave like conditions in brothels.  The internship trend for graduates is an example of “work for nothing” which must be close to slavery.

Why do companies exist? If anyone thinks it is for any other reason than making money, you should check it out with Santa Claus. You probably expect him to drop in around Christmas. Imagine a CEO or Board Member seriously said the company was not there to make money. Career suicide? Of course companies are there to make money. It all is supposed to happen within the bounds of what government will allow.

Give an example. The government reduces penalty rates as they did a few weeks ago. Has anyone heard an employer say “I can now reduce your penalty rates legally, but I won’t because I don’t think it is fair.” The default position is “I have to reduce rates to stay competitive”. “My competitors will reduce their penalty rates and if I don’t I will go out of business”.

Since the first dispute between business and government over the right to make images on cave walls, business has pushed government to ease the rules to make them richer. In fact, the less rules the better for business.

The argument is often takes the form of “the thin edge of the wedge” approach. Sure there are rules and laws that seem to be onerous.

Two things need to be considered. The first is why the law was put in place. What was the original reason the law or regulation was put there? If the reason is no longer valid, the law should go.

The second is to remember that a single law cannot cover every situation. It is like speed limits. A road with a 60 kph limit may have sections that are unsafe at 60 and sections that are safe at 80. A rule cannot cope with every circumstance. That is why the law should be applied rather than enforced. Too much enforcement is on the trivial rules because they are easier to police. The major rules can be very complex to apply once the government and industry start arguing nuances. Think tax.

Which brings us to another argument for governments putting in place rules. It comes down to a lack of morality and civility by business. Businesses do things to people that people would never do to people. If a friend or acquaintance rang you, would you ask them to hang on for half an hour before you talk to them? Would you give a friend advice about which bank to use if it was going to put a secret commission in your pocket? Would you invite people to a party, then ask some to leave because it was becoming too expensive to have them there?

If a company has little in the way of moral or civil values. The boundaries of what is acceptable have to be defined by an external party i.e. government. Every time we think there are some boundaries, someone crosses them. Underpaying wages, pollution, financial ripoffs, using cheap third world labour, bribes and kickbacks. The list goes on.

When I hear companies or industry bodies talk of self regulation, or cutting red tape, to me it means one thing. Blur the boundaries. Let us get on with making more profit. Forget the harm we might do in the name of economics.

I am starting to sound like a socialist but there is a role for private enterprise in our economy. To counterbalance it however, there needs to be a role for government to build the fence around private enterprise. If it is not there, we, as individuals, will suffer. What worries me is the Liberal government line that government needs to get out of the way and let private enterprise flourish. That is the only way to increase jobs and growth. If they say it often enough, people might start to believe it. We all need to think a bit deeper about what that really means.