So who are the middle class in Australia?  Are families on $250k the new middle class as someone (who shall remain nameless) said?  Maybe it is time to get some facts.

This is a graph of household income in 2009-10 from the Australian Bureau of Statistics. 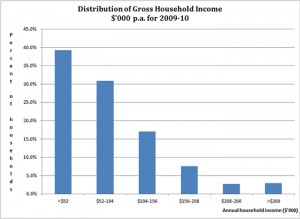 You must call anyone over $150k (13%) wealthy in terms of household income.  To be generous, you might call those between $100k and $150k (17%) upper middle income earners rather than wealthy.

Knowing these facts, who are the ‘middle class’ often referred to by politicians?  In terms of household income, it is those up to somewhere between $100k and $150k.  There is no definitive level but it is somewhere in that range.

The bottom of the middle income scale is more difficult to nail.  There are nearly 40% of people under $52k household income.  Are these the poor or does middle income band start somewhere within that range.  It depends how you want to define it.  The Australian Bureau of Statistics has some information at the following link.

Why do people not feel wealthy even though they may be earning over $100k?  There are two obvious reasons.

Next time you hear the term ‘middle class welfare’ think about who is this ‘middle class’ that deserves to be paid welfare.  Is it fair that someone who is obviously in the upper levels of income should be subsidised?  There is only so much money to go around.  Should the top 13% of the population (over $156k) be eligible for benefits at the expense of lower income families?

Benefits are not an open ended entitlement.  They are there to support those who have trouble supporting themselves.  Those who struggle to put food on the table, or send their kids to school.  Those who cannot earn enough because they have a disability or have lost their job.  A party that cannot put essential support in front of payouts to keep voters on side does not deserve to be in power.