You have to feel sorry for Malcolm Turnbull.  Watching him squirm as he talked about cuts to the ABC was like watching a man in barbed wire underpants.  The pain was excruciating.  You could see he knew that we knew it was a fine load of bovine excreta, but he had to say it.  Tony had told him to.  How it must make every ethical nerve in his body twitch. 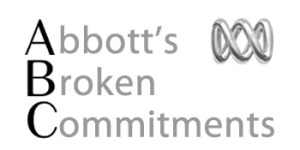 If you were in government, would you want to support or stifle the ABC.  Over the years, they have proven a thorn in the side of governments of both persuasions.

Just take 4 Corners.  Remember the Joh expose, or the sheep export scandal or the bribes involved in selling bank notes.  What about the expose on stolen children or abuse of children in care.  Where were the commercial channels when this was going on?  The problem is that the more you have to hide, the bigger a problem the ABC can be.  The ABC is a very, very big problem for the Liberal government. Secrecy is at the core of their modus operandi.

Then look at ABC support for the Australian film and acting fraternity.  ABC has constantly pushed Australian drama.  While the commercial channels have a quota of Australian production to be put to air, they make it up with Masterchef and Big Brother.  They do nothing to encourage the Australian film industry.

Abbott has tried to cripple the ABC by appointing right wing members to the board.  Janet Albrechtsen and Neil Brown are the latest ones.  Albrechtsen is constantly writing derogatory editorials about the ABC.  Imagine if a board member of a bank or mining company was constantly critical of the company they were board members for.  I would think they would quickly have a bit of extra time on their hands.

The cuts have even got Allan Jones angry.  He says it fails the pub test.  The excuse for breaking the no changes commitment is totally unbelievable.

The ABC is like the “ICAC of the Air”.  It keeps the bastards honest.  All Bill Shorten has to do is promise to return funding to the national broadcaster and he will pick up a swag of votes. I suggest we print out the ABC image above and tape it to every post in Canberra. Click here to download it.  Let the politicians see that we do expect them to honour their commitments.