Its not as though there isn’t a problem. There is. We are spending more than we are collecting in tax. Neither party has denied the problem, but the problem is part one. Where differences occur is in part two. What do we do about the problem?

The reason for the general rejection of the budget was not the attempt to balance the books. The problem is the unfairness of the proposed solution. People generally recognised that we needed to cut back but they did not see GP fees or raising the cost of education or cutting back unemployment benefits or cutting the ABC was a fair way to do it. There is probably an element of NIMBYism in all this but that could have been overcome if it were seen as fairer. Abbott can hardly blame the Labor party. They have been fairly low profile in comparison with the press and the public.

My suggestion to Abbott (Yes, he has been waiting months for this) is to start with the big picture. Set three objectives for potential to raise revenue. Where can we raise revenue or reduce costs from:
1.  People who should be paying tax or are benefiting unfairly from government benefits?
2. Situations that encourage inequality?
3. Those who can afford to pay more? 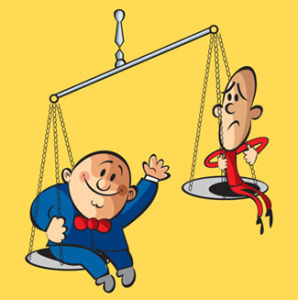 The second suggestion is to take the long view. The good Mr Abbott has said he is not looking 16 years ahead. Nor should he. He should be looking 50 years ahead. Unfortunately I don’t think that is what he meant.

If we take our best shot at the next half century, a couple of things are obvious.

The environment is going to be a major problem and a major opportunity. As the world struggles to manage the environmental damage, opportunities exist to provide solutions be they solar, hydro or technologies yet to be invented. Should be be investing in R&D in this area? Of course we should. What we should not be doing is cutting back CSIRO, getting rid of the Minister for Science and winding back environmental regulation that would stimulate development of new environmental solutions.

The Asian region is going to boom. It is blindingly obvious that we will never compete in manufacturing where the biggest cost is labour. We need to compete with a highly educated workforce to provide services to the region. How this aligns with making education more expensive at the university level or cutting back Gonski funding alludes me.

The population is aging. This is going to result in higher medical costs. What can a government do? More funding for preventative medicine would be a good start. Stop people getting sick in the first place. Does this align with removing the free bulk billing environment? Not likely. Does this align with reducing migration when younger migrants can pay taxes that support retired people who typically have higher medical expenses? Not likely.

Inequality is increasing. The gap between the wealthy and the poor is increasing. Surveys come out every few weeks that highlight the problem. Superannuation is a great social tool to support your retirement years. It is not a great social tool when it becomes a way to reduce tax on surplus funds. Surely there is a maximum limit for the amount you can hold in a super fund. All the financial organisations will scream blue murder and forecast the end of life as we know it if the government said something like you can only have $5 million per person in super. Any more is taxed as non super money. How much is enough?

Corporations will continue to grow and exert more and more influence. If you look at the 200 biggest entities (countries and corporations) in the world today, a quarter are corporations. It is both fair and reasonable corporations pay tax where they earn their money. There is some noise at the moment about Google et al not paying their fair tax. If a government is serious about addressing the issue, why cut the tax department numbers? Shouldn’t they be out recruiting? What if the government created a charter of corporate responsibility and if the corporation didn’t sign it, they had to pay a flat tax on revenue collected in Australia.

Finally, independent information is harder and harder to obtain. Commercial media has an agenda. They do not want to offend advertisers, political parties that support their future revenue, influence peddlers that want a view promoted, or even their owner’s personal biases. That is why the ABC is such an important institution. You can tell when an organisation like the ABC speaks fearlessly. If the government of the day wants to silence it. Mark Scott must be doing a good job.

So what should Tony Abbott and Joe Hockey do? Firstly stop using the spurious argument that by blocking particular measures the Labor party is denying there is a long term structural problem with the budget. They know there is a problem, they just don’t like your solution. Start a conversation with Australia around how it is to be addressed. Using the three objectives above seems a good start. When people start to accept the three objectives, then look at what measures would fulfill those objectives. Discuss those measures in the context of the three objectives, and with a view to the long term.

So boys, something to think about over Christmas dinner. I may not like your government, but if you did seriously address some of the issues I have outlined, you might live to fight a second term. I will vote for the party that does the best for Australia. I don’t care if it is Liberal, Labor or Green.