I am going to be brave.  Really brave.  I am going to propose what should be in the next budget.  Now I don’t have access to the Government Budget Office or Treasury so I will have to give some general comments rather than quoting figures. 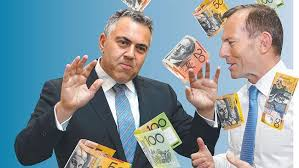 Let’s start with some issues and principles:

So what do I believe we should do with revenue collection?  Here are some thoughts to increase revenue.

Now on to expenditure:

Does it matter if the budget is balanced?  No.  It is more important right now to get the economy working rather than to balance the budget.  That means creating jobs, and getting people off unemployment and trained to take those jobs.  It means making it attractive for mums to return to work.  It is about companies paying their fair share of tax.  Most importantly it is about getting confidence up.  Once the economy picks up, we can start to focus on reducing the deficit.

Can it be sold to the public?  I believe so.  It needs calm rational explanation by a government to explain what they are doing and why.  You need to focus on key revenue and expenditure items and not create a minefield of minor changes that take the focus away.  When the front page of a newspaper runs stories of how a few hundred thousand were cut from somewhere and it will cause the end of life as we know it, how can you cut through with the big picture?  Don’t tweak and trim.  It is a distraction.  Focus on half a dozen key areas and explain them to people.  Tell them why it is a benefit.  Explain how a deficit is not going to have the country declared bankrupt.  Explain the purpose of a deficit, and how it can boost the country.

Will anyone take notice of a suggested approach like this?  I doubt it.  Easier to engage in political trench warfare using traditional arguments.  Deficits are bad.  Taxes are bad.  Money that finds it’s way into my pocket is good.  I fear when the budget does appear in May, it is likely to be another grab bag of badly thought out ideas that will do nothing to boost the economy or make the life of the average Australian any better.  Remember the last time we engaged in trench warfare was World War I.  Millions died.  Trench warfare is 100 years out of date.  Our approach to budgeting is also getting out of date.