The first few weeks of the election campaign were not going well.  No surge in the polls.  No capitulation by Labor.  No gaffs from the Shorten team.  Malcolm the Almighty was worried.  He gathered a few of the most creative minds in the Liberal party together in the Cabinet room to discuss the future plans.  The room was barely big enough to contain the assembled intellect. 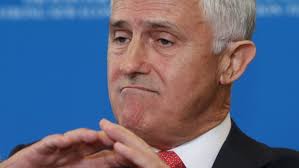 “Mate.  Mate.  You know a thing or two about winning elections Tony.  What is your take on the campaign?” said Malcolm.

Tony’s forehead wrinkled as that fine mind kicked into gear.  “Bloody crawler” he thought. “Still better to win  the election than to get my revenge right now.  Revenge can wait, then one day I will arise and strike him down.  Be PM again and reunited with Peta Credlin.  Make her Treasurer and enter a new era of the 1950’s.”  He still thought he had lost focus as PM because he was an Abbott and didn’t know which Bishop to report to. Julie or Bronwyn.

“More three word slogans.” said Tony.  “Keep it simple so the punters can understand it.  Most of them struggle if you use four words in a sentence.  Why do you think we opposed Gonski?  Making things better for those Liberals in the future.  Last thing you want is an educated electorate.  What about “Jobs and growth”.  How is that going?”

“Nah. Three words “Jobs and Growth”.  That is what we stand for.” said Tony.

“The only thing I stand for are old ladies on the bus.” said the always hilarious Mathias Cormann.  He was renown for his Zimbabwean sense of humour.  Probably renowned in Zimbabwe. For 24 hours after the ministerial posts were allocated he thought he was given some sort of agricultural portfolio.  Minister for Fine Ants.  The Australian accent had always been a problem.

Malcolm chimed in.  “Well, it is true the Liberal party stands for jobs and growth.  More low paid jobs, and growth for big business.  Hardly misleading the proletariat.”

Kauri jumped up, obviously excited with his idea.  Ideas always excited him.  He was not however used to excitement. “I know. I know. What about “Re-elect the Incumbents?”

“Why don’t you try it in your electorate Kauri?  See if it floats or not.” said Malcolm in his most reassuring manner, which usually meant he was feeling sorry for a lesser mortal.

“I have a good one.” said the jocular Mathias. “Avoid the Bishop stare”.  If they vote Labor, Julie will give them the death stare.”

“Mathias that is four words.  Maybe we should move you to a job where counting past two is not a prerequisite.” said Malcolm.

Scott Morrison had been sitting quietly in a corner.  His thoughts far away dreaming of his idol, George W Bush.  Not about to slip into the same trap as Mathias, he was carefully counting on his fingers while constructing a slogan of only three words. “I like this one.  “Labor are Wankers”.

“Well done.” said Malcolm. “Only three words.  No wonder I made you Treasurer.  Might be seen to be a tad negative though.”

“Talking about negative, what is all the fuss about negative gearing?  Can’t we counter with positive gearing?” said a deadly serious Scott Morrison.  “Need to either get on the front foot, or close the door and tell them nothing.  Can we make negative gearing something we are not allowed to talk about?  Call it a security operation or commercial in confidence.  Accuse Labor of breaching security confidence and encouraging terrorism by discussing it.  Call it Operation Sovereigns and Shillings.”

Malcolm’s reassuring face was replaced by one not dissimilar to a footy coach trying to teach a three week old to kick goals from half way.  He muttered under his breath “If I wasn’t an atheist I would be asking God to strike down the imbeciles surrounding me.  God give me a few people to work with, who have an IQ greater than their age.  Why can’t I have a team of intellectual equals?  Oh. That’s right.  I don’t have any intellectual equals.”

“Growth and Jobs” said the brilliantly creative Abbott.  His creativity had been a shining light since the time he was PM.  He was famous for tuning things around from boats to promises.  A broken promise was simply a realignment of policy direction in light of unforeseen developments on the global stage caused by the previous Labor government.  The man was a genius with words.

“Is Grothen Jobs related to Steven Jobs?  I met him once when I was on a ministerial jaunt to Apple.  He kindly drafted legislation on tax treatment of multinationals.  Told me all about the iSponge.”

“Think that was an iPad Minister.” piped up the Minister’s assistant who had been sitting quietly in a corner unsure whether to laugh or cry.  He rarely attended Cabinet meetings these days.  A few years back he had attended two in one week and had to be put on suicide watch.

At that stage the door burst open.  A small disheveled man entered the room.  His clothes were both worn and torn.  His face had not seen a razor for many days, much less soap.  His shoes could best be described as top foot coverings.  Mathias thought they lacked soul.  He was proceeded by an odour reminiscent of a rubbish bin during a heatwave.

“Think you have been looking for me.” said the stranger.  “Name is Jobson.  Jobson Grothe or at least that was what my mother called me.  Been living under a bridge for a few decades and heard  from my sister Kanserous, that the Liberals were going to deliver Jobson Grothe.  Where are you going to deliver me to?”

Malcolm cringed.  The inevitable had just happened.  Somewhere in those 24 million people there was bound to be a Jobson Grothe.  Could he play matchmaker?  Match Jobson up with Laura Norder?  “Your delivery is scheduled as soon as the electorate deliver us another 3 years.  Until then, bugger off.”

“You are getting 3 years jail.  Must be bad maternal fornicators.  I am out of here.”

Barneby walked in just as Jobson left.  He had been tramping around some of the remote cattle stations in the Northern Territory.  The odour was similar to Jobsons.  “G’day all.  Been talking to a few beef producers and they came up with a ripper slogan.  “Malcolm.  Turn bullshit into gold”.  Get it Turnbull – turn bullshit.  How about that?”

With fingers flexing as thought he was warming up for a nose picking championship, Scott burst forth.  “That is more than three words.  We decided earlier no more than three words.” He sat back, arms crossed, feeling smug.  Always good to get one up on Barneby.  Why should the Nats get the deputy job when a man of his intellect was obviously available?  It would reassure the public to know if Malcolm is away, I am in charge rather than Barneby.

“But in the bush, we talk slower.” said Barneby.  “We can understand more than three words if we talk slowly.”

Scott, the son of a Morris dancer, was confused.  Beyond confused.  It was as though someone had just tried to describe nano physics to the three week old who could not kick goals.  “Could we add another word and have two three word slogans?  Maybe make bullshit two words.”

Malcolm could see how Scott always wanted to balance the budget.  Add another word!!!  At least the Treasurer would never suffer from brain cancer.  Nothing for the tumor to attach to.

Kauri had been quiet for some time.  He was reading the Economist.  Actually he had a comic inside the Economist but always liked to look and sound intellectual.  Another thought hit him.  That was two in one day.  Breakfast of left over pizza with Coco Pops on top must be stimulating his mind.  What about “Education and Health”.  Those two are always a winner.

There was excitement around the table.  Everyone was enthusiastic and high fiving Kauri.  Brilliant said Scot.  A winner said Tony.  Why didn’t I think of that said an obviously disappointed Peter Dutton.  Being upstaged by Kauri Pyne was just about the last straw for Dutts.  Might as well quit parliament and take up the role Malcolm offered me.  Australian ambassador to Manus Island.  A quiet life.  No Australian citizens to look after there.

In a corner gently weeping on Julie Bishop’s shoulder was Malcolm.  “Why me?  Why me?”  The perpetual bridesmaid Julie removed a leaflet from her purse.  It had been shoved in her hand during the latest visit to a shopping centre.  There in bold letters were the words “Vote for Bill Shorten and Labor.  We stand for Education and Health.”  She tossed it on the table.  A hush fell over the Cabinet as those who could read, digested the message.

“Bloody hell.” shouted Mathias.  “Labor stole our three word slogan.  I think we have a leak in Cabinet.”

and nobody knew if he was being serious or if it was another  joke…..