For the last two weeks the local media has been full of Israel Folau’s comment on homosexuals. For people who are not aware, Israel Folau is probably the best rugby player in the world. He is also deeply religious. In the recent debate on gay marriage, he was firmly on the “no” side.

He was asked on Instagram “What was God’s plan for gay people?” Folau replied, “HELL…Unless they repent of their sins and turn to God.”

He was immediately criticised by the media and withdrew the post. Since then he has been silent on the topic but has made several references to the Bible about being persecuted for saying what you believe to be right. 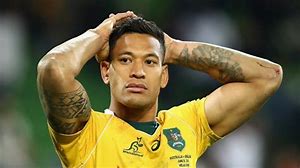 The judgement is not as straightforward as some would like to believe. In order to show both sides of the argument, imagine you have to list the reasons to support his action and the reasons to condemn his action.

I will start with the reasons to condemn.

But what about the reasons to support his right to make such comments?

I think he more regrets answering the question rather than regret the opinion he expressed.

What has never been challenged is his actual belief in what he said and his integrity in dealing with the incident. He withdrew the post soon after he made it, and he offered to forfeit his contract with the ARU if they requested him to do so. He has to be admired for that aspect of his character even though many disagree with his comments on gay people going to hell.

Could he have addressed the question in a different way? It is always easier to find a different path after the event, but the reality is the answer he should have given is a bit more complex than one line.

Israel has made a choice. He does not believe it is necessary to look at multiple sources of information when deciding moral issues. In deciding whether to accept the gay community as part of society, most people draw on personal experiences, gay people they might have come into contact with, what they read, what their friends think and make a judgement as to how they view the gay community. Israel has made the decision that his reaction to the gay community is defined by the Bible. I am sure many of his moral principles are not the result of long consideration and personal experience. His moral code is directed by what is in the Bible. That is his valid choice. Billions have made the same decision through history.

We live in a relatively free society and the last time I looked, the Bible was not on the banned book list. We don’t tell people they must ignore the content of the Bible or the Koran or any other book purporting to be a religious doctrine. People are free to take whatever path they want to make moral judgements. We are allowed to argue vigorously against their point of view as they are to challenge our view.

This is the passage in the Bible.

Corinthians 6:9-10 Don’t you know that the unrighteous will not inherit God’s kingdom? Do not be deceived: No sexually immoral people, idolaters, adulterers, or anyone practising homosexuality, no thieves, greedy people, drunkards, verbally abusive people, or swindlers will inherit God’s kingdom.

Not just gays. Also a range of other “sinners”. I think I might be in trouble.

Six little words as a prefix could have avoided much of the problem. Had Israel started his reply with the words “If you believe in the Bible…”. It would also have been useful to add further comments that each gay person who has a religious inclination has to find a path of reconciliation between their sexual preference and their religion. The problem is not being gay. The problem is finding a religious environment that accepts that it is OK to be gay.

Expanding the topic a little, the Catholic church tells people not to use contraception. Can a strict Catholic doctor prescribe contraception and still say they are true to their religion? If a Rabbi is asked what will happen to a Jew who eats pork, how should they reply? Will that person go to hell? Would it be a better world if politicians told us exactly what they believed?

The key questions to me are these.

Everybody wishes the whole incident had never happened with one exception – the media. It sold lots of papers and filled the TV news. One of the reasons the media love this sort of story is that there is no clear right or wrong. Depending which way you look at it, it can be either justified or condemned. The media can draw on two people with opposing views to put their case, and extend the coverage for another few days.

If I were to give some advice to Israel Folau, it would be to have approached the answer this way.

“I have chosen to believe in the Bible in a literal sense. That frames how I must answer the question. The Bible says that a number of sins including being gay, drunkenness and verbal abuse will get you a ticket to hell. If you are gay, you can choose to believe the words of the Bible or not.  Each of us must make our own choice. My choice is a strict interpretation of the Bible.