With those four words, Bill Clinton summed up the relationship between business and politics in the 21st century. Politics become focused on the economy. Politicians then started to assume the “economy” is a pseudo name for business. Somehow “It’s about Business stupid.” does not have the same ring.

It was not always thus. There were times when politicians believed they were about the people, not business. They believed their first responsibility was to the people who elected them. To make the life of the people better.

Where did it all go wrong?

If you have to come up with the big one. One line that describes an entity. Try this.

“Business is a structure put in place to deliver the biggest returns possible to its shareholders.”

The definition of business is relatively straight forward. It is easy to understand.

The definition of government is more complex. Who can most afford? Who can least afford? What is an acceptable standard of living? The answer is, it changes all the time.

You need a bill of rights to answer that question. Some countries have been smart enough to put a bill of rights in place and others not. In any case, the values within the bill need to be constantly reinterpreted.

This is not a definitive list but here are some of the basics:

The last one is the kicker. Suddenly government needs the help of business. Actually, if you look back to things such as food, medicine and education, business has a role to play. The problem is, the two structures are set up for conflict.

Business is about making profits. Selling at the highest price to maximise profits. Government is about making the redistribution of dollars go the furthest.  Getting things as cheaply as possible. The dance has been going on for centuries and will continue to go on for many more.

Take an example. The pharmaceutical industry and government have been at loggerheads for decades over the price of drugs. Governments want to get the best value from redistributed income, and big pharma want the biggest profits. An irreconcilably position. Can you imagine a big pharmaceutical company saying “We have the only drug that will cure cancer, and you can have it for $1 a dose.”

Aside from the board being fired by shareholders, the company would be out of business. They invest billions in R&D and want a return. If they were only getting $1 a dose, they would never invest in research in the first place.

That is the way the world works. I still find it hard to understand people who think it is different. They expect altruism from big business. Big business will only be altruistic if there is a dollar payback. That is their purpose. If you want true altruism, find a structure without a profit motive.

Now to government. At a fundamental level, redistribute money means being Robin Hood. Take from the rich and give to the poor. Another theory has crept into this concept over time. It is called “make the pot bigger”. If a government puts money into a particular area, maybe that area will grow, and the total pot will get increase. More money from taxing more profits so more to redistribute. No need to take it from the rich. 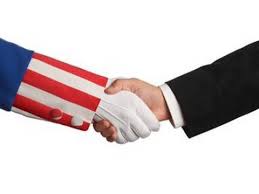 For years this was called protectionism.  Governments moved beyond the idea of give with one hand and take with the other. They took, but gave to particular segments of the economy. Charge taxes on imports and subsidise local industries to keep the businesses viable. The theory was it would employ more workers, and save the government giving money to people on low or no income.

Business thought this was a great idea. They paid a dollar in tax, but the government took another dollar off their competitors who might be importers, and gave it back to the local business to keep it afloat. Think the car industry in Australia. Think what Trump is proposing for steel and aluminium in the US.

Now we had an inter-relationship between government and business. The song from the business songbook was that if government support us, we will create wealth and save you supporting the less well off. Don’t worry. We will give them all jobs, and government will not have to support the unemployed. In other words, redistribute the wealth to us as subcontractors to look after the less well off.

To digress, I listened to an interview with a CEO of a major software company. He said that 1980 30% of the population lived in poverty. Now it was 9%. The definition of poverty was not really stated, but it is probably true. The figure he missed is that there has been an equally large change from the rich and upper middle-class segments into the struggling segment.

The aim of business is to have a few rich, and most in the day-to-day survival segment. Move the unemployed into the day-to-day segment, but also gradually move the comfortably well off down the food chain.

To do this, you need to abstract people. They are no longer that family next door who you have known for twenty years. They are not people just like you. They are human resources. One step removed from physical resources like forklifts and computers. You must optimise your human resources just as you would decide you need one less forklift in the warehouse. Impersonalise the act of removal.

Organisations spend much of their efforts to develop group-think. It is like a game. Taking someone’s ability to feed their family is not firing them. It is to make them redundant or offer them new opportunities. It is done in the best interests of the company, not of the person.

So, governments have bought into the lie that only business can solve their redistribution problem. Only business can make life better for the less fortunate individual. If that less fortunate individual should say “No. Help me directly. Don’t rely on business to help me in some convoluted way.” Government ignores the individual. Governments say “Our solution is too sophisticated for you to understand. It is all about the economy.”

Business sees the individual as a cost unit. They have a value to the organisation. What is the minimum that unit can cost us? How many employees see themselves in that light? Not many.

So that is what is wrong with the world, but where can it go from here? I suspect downhill. There will be posturing on both sides. Company HR initiatives that do nothing. Threats from the workers. Government intervention on both sides that fail to change anything.

The word of the current era is “disruption”. Until we see disruption in the model where government outsources redistribution of income to business, nothing will happen. Maybe there will be disruptive forces that come into play some time in the coming decades. The position of business is far stronger than that of government, so I have no idea where it will occur.

In the US it is going the other way. Trump is so pro-business that the disruption is happening to change the scales in favour of business. But then again, knowing the uncertainty associated with Trump, it might all blow up in his face.

During Afghanistan, the US military coined a term. The “VUCA World”. VUCA stood for volatility, uncertainty, complexity and ambiguity. The term is creeping into the business world. It describes the unreadable world we live in. Where something like Uber can disrupt the taxi business. Where Airbnb can disrupt the hotel industry. All in the space of a few years.

Maybe there is something that will disrupt the government business interdependence. No idea what it is but can’t wait for it to arrive. One day governments might not be about the economy. Someone might say:

“It’s about the people stupid”

And if you missed it in the title, BaG is Business and Government.