‘Twas way, way back. About 2 million BC. We know about a man who lived then, through a recently discovered cassette tape.  His name was Trog Le Dite.  He was famous back then because he was the first to decide people should live together.  A community.  Up till then people lived on their own.  He decided they should live in a town.

It did however raise some problems. Being used to only looking after number one, people just took advantage of those around them. What we would today call a “breakdown in society” started to take place. Trog gathered his leaders around and had a meeting. It was all recorded on cassette.

“We have to do something.  Just today three people were killed, I heard of someone dragging off someone else’s husband by the hair, and my BBQ went missing.” 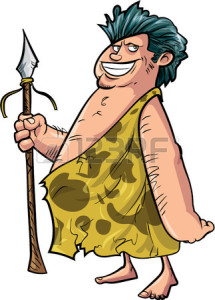 “What we need is ethics.” said the wisest person in the group, Bog Le Dite.  Bog was the brother of Trog which proved his parents had little imagination.  The eldest was Jog but he had run away from home.

“Sort of rules to enable us to live together.” said Bog.

“Sort of, but ethics are things that people just accept as the way we should behave.  What we need to do so we can live together without harming one another.”

“So give us some ethics Bog.”

“What adults do with someone who is not their partner.”

“Got it.” said a number of adulterers who formed part of the leaders group.

Trog was pleased.  He now had a framework for his society.  A set of standards that would ensure success for his first town, as long as everyone followed the ethical rules.

Trog turned to a near relative, Moses Le Dite.  “Can you carve those on a stone tablet Moses.”

“Next problem.” said Trog “Some of the plebs are complaining that we shouldn’t be running the show.  They say they are getting the short end of the stick.  We were never appointed chiefs.   Any ideas Bog?”

“Ever heard of God?” said Bog.

“Never heard of him.” said another.

“Is it dog spelt backwards?” said one of the more dyslexic members of the group. “I have a dog and he sometimes walks backwards so shall I call him a god?”

“What about religion?” said Bog.

Blank looks came from around the stone table.

Bog smiled.  “It is a concept I have been working on.  This is how it works. Now we all go through tough times during our life.  Stub your toe, loose your arm to a sabre tooth tiger, your wife leaves you then comes back.  Now what if there was another life you could lead.  There were two places you could go.  One was full of joy and roast hairy mammoth steaks.  The other where you were burned regularly, and fed only raw vegetables.”  A shudder went through the group.

“How do I get to the BBQ life?” they all asked.

“There are conditions.” said Bog.  “These worlds exist after you die.  If you are good during your life, this character called God sends you to the great BBQ in the sky.  If you are bad, you go to the vege patch. ”

“So how do I know this God exists?” said Trog.

“I just told you” said Bog.

“And another thing. Do you want to take the chance he doesn’t exist?  Do you want to believe that one day you will die and just become crow feed?  What if he does exist and you end up in the vege patch?  Of course you don’t want to be a disbeliever.  You want to believe you will have a better life after this life.  This life is all about pushing shit uphill with a pointed stick.  The more you push, the better the BBQ in the next life.  Gives a reason to the masses for their suffering in this life.”

“So how do we know what this God bloke wants us to do?”

“That’s the genius of the idea.  We have people we called priests.  People who have a hotline to God and can tell us what he wants.  They are appointed by God so who can say they should not be priests?  To say that would be to challenge God and you don’t want to mess with the maker.”

“So are you a priest Bog?” they asked.

“Sure.  And, by the power vested in me by God, I appoint my brother Trog as leader, and you as his council of advisors.  If we combine ethics and religion, we can get people to live harmoniously applying ethics, then tell them what to do via religion.  Ethics say don’t kill one another, but a priest can say God has made an exception.  You can kill that group who want to own the land around the river.  If you do it, you are one step closer to the great BBQ in the sky.  If you don’t, there is a plate of salad greens waiting.”

“What about some rules.” they demanded.

“Here are a few I thought of.  There is only one God and it is me.  Don’t cross me.  No other gods allowed.  Speak of me with reverence.  You need to spend one day a week hearing about me and what I want you to do.”

Get out the chisel again Moses.

Trog was pleased.  He leaned back on his rock throne and mused.  “Ethics and religion.  With those two, we can rule the world.”

That was the end of the tape.  Roll forward to today and let’s see where it has lead us.  We have hundreds of denominations.  All are a mix of Trog’s original scheme – ethics and religion.  If you strip out the ethics from each, you will find most are remarkably similar.  Be it Christian, Islamic, Buddhist or Hindu, they all say the same sorts of things about ethics.

When you get down to the religious aspects, there are many differences.  Some have one God, others many.  Some have angels, others virgins.  Some have celibate priests, others allow married imans.  Some allow women spiritual leaders, others only men.  They all want to have as many people in their club as possible.  Consequently, my god is always superior to someone else’s god.

Now if all they did was hold an advertising campaign to recruit new members, it would be fine.  By all means argue to move people from Team A to Team B but always respect an individuals right to select, and practice their own religion.  The problem is that, like Trog, certain people see a particular religion as a way to justify and expand power.  A way to justify invading another person’s land.  A way to annihilate competitors. From Crusaders to the Reformation to Islamic State, religion has shown a lack of respect for the right of the individual to be part of whatever religion they choose.

In all these cases, it is not the fault of the religion as a concept.  It is the fault of the leaders at the time, who twisted the purpose of the religion to suit their own ambitions.  Conceptually, Islam and Christianity should be able to coexist.  In many countries over the centuries they have peacefully coexisted.  It is when one religion uses force against the other when it is wrong.

And look at when that force was used.  It is almost always for reasons of power and land.  Henry VIII broke away from the Catholic church because they would not grant him a divorce.  The Crusades were to gain land in Palestine.  South America was invaded in the name of religion in order to get the gold. Daesh is about grabbing land in Syria and Iraq.  All about power and control.  Usually about terrifying people into supporting a cause under the guise of religion. 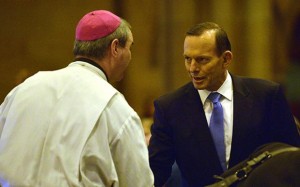 We have a problem in Australia.  The Abbott government has tied together Islamic religion and those who would use any means to gain control of areas within the middle east.  The enemy is not the Islamic religion.  It is those who see Islam as a mechanism to gain control of Syria and Iraq.  There are many people who are convinced they are fighting for Allah, but they are fighting for a shadowy group who want power over countries.  They then use their version of Islam to suppress the people and make them slaves to the so called priests. I have met many Australian muslims who are as unthreatening to me as I am to them.

Abbott is stoking the fires of anti-Islamic sentiment.  He is doing exactly what Trog did.  He is using religion for his own agenda.  The threat of terrorism is miniscule beside the threat of domestic violence, or dying on the road, or preventable disease, or industrial accidents.  The political eye needs to move away from the threat of terrorism and focus on areas where real gains can be made.  Where probability of death and injury is many times more than terrorism.  Where something more can actually be done.

And on the ethics front, the government is trying to push schools to have religious instructors teach ethics.  Surely they are two different subjects.  Ethics is how we live together as a community.  Religion is how we spend this life in preparation for the next.  Why do they have to be combined?  There is overlap as there is between chemistry and biology.  Chemistry and biology exist as separate subjects.  So should religion and ethics.

I had the mistaken belief we lived in a secular society.  A society where all religions were tolerated.  Where governments operated in a way that neither supported one religious belief over another, nor pandered to particular religions.  Where you had the choice which religion you wished to practice or not practice.

Over recent years we have seen priests use their power to abuse children.  We have seen radical  Imans try and turn young men against their country.  We have seen churches oppose gay marriage even though those wanting to get married had no association with their religion.  What more proof do we need before we say ethics is a positive thing which should be taught.  Religion is too often a tool for power and control.  At best it should be an optional educational pursuit for those who choose to attend a church school.

Pope Francis has broken the mold for a religious leader.  He is putting ethics way in front of religion.  He talks about how we treat the environment, the gap between rich and poor, and people’s rights.  Perhaps Abbott should pay more heed to the person who heads his branch of religion.   The sooner we appoint a secular Prime Minister, the sooner we will live in a peaceful, diverse society.