“A social division in a traditional society consisting of families or communities linked by social, economic, religious, or blood ties, with a common culture and dialect, typically having a recognized leader:” 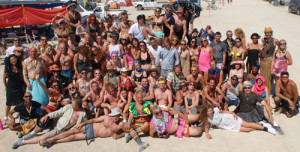 A tribe in the sense of suburb, city, state or country tends to be linked very much by social and cultural similarities.  In some cases it might be religious but not so much in a place like Australia.  Being part of a tribe means we have a sense that we have to look after one another on some level.  We gather taxation revenue to provide schools, medical support, pensions and defence for the tribe.  Look after our tribe first, and other tribes if we can.  Preferably those tribes that have similar values to our values.

Which brings me to the point of this article.  Foreign ownership of land in this country.  Australia has similar concerns to many western nations regarding the land being sold to people who are not part of the tribe.  I will look at four kinds of land use and how foreign ownership may help or hinder our tribe. Is Australia for sale?

Firstly, land sold to foreign organisations for mineral exploitation.  Because Australia is so rich in minerals such as iron, copper, coal, gold and silver, foreign companies want to buy the land, and mine the resources.

Days of prospectors setting forth with pick and shovel are long gone.  Mining requires billions of capitol and a brave investment strategy.  Prices for iron have halved in a few short years.  LPG was going to be a boom but is struggling to survive.  The bottom has fallen out of coal prices.  Leaving aside BHP Billiton and Rio Tinto which are both more international companies these days, are there Australian companies willing to take the risk, and cashed up to make the investment?  Not many.  Most are struggling to survive at the present. 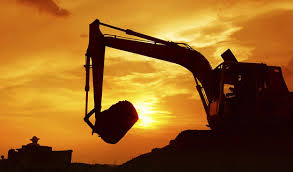 The question then becomes, are we willing to sell our minerals to overseas companies, and how do we price them?

On one extreme, we could lease the land to the mining company and take a cut of their profits.  When Rudd tried to introduce the minerals resource rent tax, or mining super profit tax, the mining companies were thrilled.  Thrilled in the way you might be when you found a deadly snake curled up in your sleeping bag.

If you take an impartial view, this seems a fair way to do it.  If the mining company takes the minerals, revenue is shared with the “tribe” who owns the land.  The more revenue it generates, the bigger the tax take.  Minors don’t like it because it ignores profitability.  They can sell at a loss, and still pay tax.  On the other hand, if they own the land, they can do whatever they want.  So if the government is to allow mining, it makes more sense to rent the land, and take a percentage of revenue.

The second group is residential land.  Imagine we discovered another Bali just off the Australian coast.  Properties were worth 20% or Australian homes.  Wouldn’t you want to get in on the ground floor?  Buy two and make your fortune.  Everyone wants a piece of the action so you immediately see demand jump ahead of supply and up goes the price.  It is no longer locals buying and selling between themselves.  It is overseas speculators driving up the price because it looks cheap compared with their country or city.  That is part of the problem of letting foreign investment in Australian real estate.  We are cheap – even Sydney – compared with central Shanghai, or Hong Kong or Singapore.

The second problem is getting money out of harm’s way.  In China there is some movement towards confiscating ill gotten gains.  Best to get the money out of the country in case you need to join your money on short notice.

You can see what this does to real estate prices in Australia.  We could easily be swamped by Chinese (or other country) money and demand outpace supply.  Up goes the price, and the locals are squeezed out just as in our example of Bali Mk2.

The government has put some restrictions on real estate investment from overseas to try and limit it to new buildings.  The intention is to add to the housing stock, and boost the building industry.  To an extent this will work, but we are creating ghettos of new skyrise buildings filled with Asian residents.  Hardly a way to encourage integration and assimilation. If you don’t believe me take a walk around Rhodes in Sydney one night.

The solution.  Limit investment from overseas, and only allow construction investment that must be sold back to Australian residents on completion.  Increase the supply, but not the demand.  There are lots of complications in this, but other countries e.g. Canada have worked through this approach.  The precedents are in place.

The third group is agricultural land.  This is the most dangerous to sell to overseas organisations.  A little history is in order.

China has gone through waves of opening itself to the outside world, then closing it’s borders, only to repeat the cycle in the following decades or centuries.  The reason is that when the eastern part of China, or the seaboard starts to boom, it draws the farmers from the central and western areas into the east.  Food production drops.  The country has problems feeding itself and the pendulum swings the other way.  The borders are closed, and the government tries to force farmers back to the land.

Modern farming techniques can alleviate much of what happened 100 or 200 years ago, but China will eventually have a food supply problem.  Not only quantity but quality.  Look at what is happening with baby formula.  People are buying up cans from supermarkets in Australia and sending them to China. 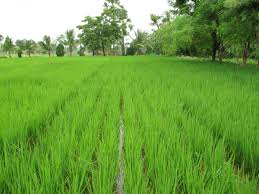 So what happens if a Chinese company buys an agricultural business in Australia as is happening with the Kidman property sale to Shanghai Pengxin group.  This is 2.5% of Australia’s agricultural land.  Once they have control, does it become a China only food producer?  In 10 or 20 years time, will all their production go to China?  Will the property just be an area we have sold to China for agricultural purposes?

A few more deals like this and China could conceivably own 10% or 20% of our agricultural land.  The land could be managed by Chinese, employ Chinese, and all the goods go to China.  Maybe they pay a bit of tax so effectively we have sold off part of our country and receive (maybe) a token rent in the form of taxation.  If the land was producing food for our tribe, it may be a different situation, but that is not guaranteed.  In fact it is not even probable.   I have a problem with selling vast areas of land to another country be it China, the US or Britain. Might as well sign over Tasmania and get it all done with.

The final group are commercial properties and many of the arguments in the previous group – agriculture – apply here.  A 99 year lease on the Port of Darwin was recently given to a Chinese company.  At least it was a lease.

What happens if we sell a major airport to say Russia.  Does that give them the right to fly military aircraft into that airport?  Maybe not on day one, but it could happen sometime down the line.

What if we sell a waterfront hotel to a US company who use it purely as a US visitor holiday destination.  Australians or any other nationalities are not welcome.  Staff are FIFO US citizens or more likely Mexican immigrants.  Is it still part of Australia?  Does it still rate as belonging to our tribe?  Have we sold off a lump of tribal dirt? 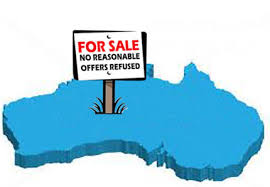 Our approach now seems to be everything is for sale unless we find some legal reason to say no.  I believe we should reverse that paradigm and say nothing is for sale unless we find a good reason to sell it.  Such an approach will improve the availability of real estate for Australian home buyers.  It will likely causes prices to stagnate or drop, but is for the greater good.  It will ensure we get an income from mining that reflects the fact we are selling Aussie dirt without giving away the actual land.  It will ensure we are not creating foreign enclaves within Australia.  All this and also ensure our tribe is not locked out of what was once our land.