To increase the GST.  To broaden the GST so that it applies to food, education and health.  Is Scott Morrison on a different path to Malcolm Turnbull?  How can we have a sensible discussion on tax when one tax sucks all the oxygen out of the debate?  The debate is flawed, but the GST is not the flaw. 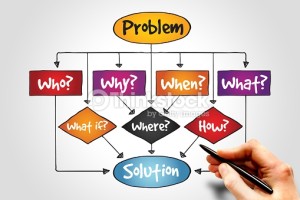 Once we understand the problem you need to define the goal e.g. 100 mbps available to 95% of households.  You can then decide the solution.    Should we aim for 95% or 100% or 90%?  Only when we agree the goal do the solutions make sense, and they can be sensibly evaluated.

I know of one problem relating to tax reform.  We spend more money on delivering services to Australian than we collect in tax revenue.  Are there other problems that we are trying to address?  I have not heard them articulated, although there are many opinions.  Everyone from Treasury to lobby groups to newspaper columnists has an opinion.  If we haven’t agreed the problem, why are we talking solutions.

The focus is on tax reform.  What is the goal of tax reform if we don’t know the problem.  Maybe there are multiple goals.  Balance the budget could be one.  Maintain current expenditure on health and education and increase at the rate of x% per year.  Change the tax burden so that there is a reduced difference in total tax collection between the bottom and top quartiles of income earners.  Increase investment in Australian industry by y%.  The list could go on endlessly.  But have we had that debate?  Not that I have seen.

Given we don’t have a problem defined, let’s look at goals.  A goal should be three things.  Quantifiable, measurable, and time bound.  Increase education spending by 5%.  Is not time bound.  Increase employment by 5% by 2020 is not measurable.  How do you know specific measures achieved that goal.  It may be a range of measures and global circumstances that help achieve, or fail to achieve the goal.  Goals that are not quantifiable and measurable and time bound are loved by politicians because it removes accountability.

There was a process put forward during the Abbott reign of comedy which did make sense.  First was to be a discussion paper that talked about the problems with the economy.  What we wanted to achieve.  In other words the problem(s) and the goals.  Next would come a green paper that would canvas the different options to achieve the goals, and discuss the pros and cons of each.  Presumably this would also explain how the various actions would be measured, and how they would contribute to achievement of the goals.  After discussion, there would come a white paper which would outline the government’s preferred option.  This would be taken to the next election.  The only problem is the wheels fell off the discussion paper.  We now have economic solutions being proposed to an undefined problem.

Scott Morrison says we have a spending problem.  That implies that revenue is OK.  We just need to cut down on the services provided by government.  It is not helpful to say we should cut back and not say from where.  The problem for Morrison is that he is not brave enough to make public his views of where the cuts should occur.  It would be political suicide to say we need to cut health, or education, or pensions.  Best to remain vague.  There is always the old chestnut – efficiency gains.  In other words trim the workforce so the department has to cut back services.  Today, think CSIRO and climate monitoring.  Last year think ABC.

Perhaps we need to put the question to the population.  Do you want to have no changes to the tax system, in return for reducing government services.  What services do you want reduced?  If health and education are off the table, do you want to cut defence, arts, overseas aid…?

Others say we have a revenue problem.  In other words we don’t collect enough tax to pay for the services government deliver.  So where is the money going to come from?  The proponents of the revenue problem are not usually forthcoming in identifying where additional taxation should be obtained.  Best to talk about multinationals avoiding paying tax.

Multinationals are easy targets to point the finger at, but far harder to extract tax from.  They take advantage of different country’s tax rules to avoid paying tax in the country to which they should morally contribute.  Australia has no influence over the tax laws of Ireland or Luxembourg or the Cayman Islands.  The ATO does good work to fight individual cases but the stakes are high for the multinational.  They can afford to throw hundreds of millions at a legal case to avoid, or at least stall, paying tax.  The ATO must spend the same sort of money to fight them.  We the taxpayers, fund the ATO to go after these people.  How much are we prepared to pay when the chance of success may be low?  It is not an easy way to increase the tax take.  Gains are marginal, and the cost of those gains massive in some cases.

So government falls back to taxes that are easy to collect, hard to avoid, and where avoidance is minimal.  There will always be some leakage from GST but it is small compared with corporate taxes.  Land tax on the family home is one with little chance of avoidance, and is easy to collect.  It is just an extension of paying rates, and is used in many countries however governments understand the adverse reaction the introduction of a tax on the family home would bring.  Superannuation is relatively easy to collect, and hard to avoid.  This is why governments look to these taxes first.

The problem is we have never had the discussion.  We are spending more than we are collecting in tax, and need to turn that around.  Unfortunately sensationalism and political opportunism stops us having a sensible discussion.  Governments just kick the economic can down the road, and hope nobody will notice until the other party’s turn to be in power.

As an individual, I would like to hear a debate about what economic problems we face.  I would like to hear a debate about the options to fix them.  I don’t care if GST changes, or land tax are on the table.  Let’s discuss the pros and cons of the solutions.  Let’s put the scare campaigns aside for a moment.  Treasury should be able to define the problem in non-political terms.  In fact they have done so if anyone is listening.  Perhaps a cross party committee could work up options with Treasury as to what we can do.  They cover the spectrum from increased revenue to reduced services.  Let’s have that discussion as a community to identify our goals.  Finally we should have a cross party committee propose how we can achieve those goals through changes to tax and/or services.

I doubt it will ever happen because politics and power will get in the way.  The poll increase from opposing a GST, or reducing income tax rates is too tempting. Power trumps logic every time.  Just ask Ken Henry who produced a taxation review of the economy for Kevin Rudd.  Good, logical ideas killed by politics.  Better to retain your power than to risk doing the right thing.