A comment from Brexit seems to sum up the world of western politics today.  A woman was asked how she would vote.

This neatly sums up a problem that is cropping up in a number of countries.  People are sick of where politics is taking them.  The divide between rich and poor is increasing and most are feeling more financially strained as the years go on.  The three wealthiest Australians have as much money as the bottom one million.  The middle class is disappearing.

What the electorate is asking for is structural change.  We need to find a new way in which we redistribute wealth.  It is a question beyond spending and revenue.  It is how do we re-create the middle class.  Forget a tax cut here and a few dollars there.  The electorate wants new thinking on both how we raise revenue, and how we spend it.  And all this needs to happen with a boost to consumer confidence, and the resultant jump in growth.

Let’s suspend reality for a moment.  Imagine you could wave a magic want, and people only had to pay half as much on their mortgage as they do now.  Instead of $2.500 per month, the payment was only $1,250.  Suddenly mortgage holders have an extra $1,250 per month to spend.  In this reality, they can’t pay off their mortgage sooner so what do they do with the money?  Some will buy a new TV, or fridge; others take a holiday; some buy a new car; put more money into their kids education or clothing.  So business booms.  Demand is up so profits are up and employment is up.

Now try an alternative reality.  Mortgages remain the same.  The government reduces tax on companies by a small amount.  Make it one percent. What that means is that for every $100,000 the company makes as profit, they get an additional $1,000 tax saving.  Company tax is reduced from $30,000 to $29,000.

The average salary was $75,603 in the last quarter of 2014.   Typically an employer has to add on another 15% for things like staff administration, workers compensation insurance etc. that equates to an employee on average full time earnings costing approximately $87k.   So, assuming a cut of 1% in the company tax rate, a company has to make a profit of $870,000 before the tax saving equates to one full time employee.  A company making that much profit is probably turning over 5 to 10 million.  Not exactly the definition of small business.

In any case why put on a new employee if demand is weak?  Why pay for an extra body if there is no additional work?  Lifting demand will pull through new employment.  Pushing people into employment where there is no new demand is both inefficient and fanciful thinking.

Comparing the two scenarios, if mortgage repayments were less, it would allow more disposable income, and generate growth in the economy.  If company tax is less, in most companies it is not necessarily going to do anything for employment.  Many small businesses will put the profit in their pocket and say thanks very much to the government.

At the top end of the company scale, much of the tax cuts will leave Australia and go into foreign profits.  Others will use the cut to subsidies profits squeezed over recent years of economic stagnation.  They do nothing to boost economic activity.  Tanya Plibersek summed it up succinctly when she said “Do you think the banks will open more branches?” 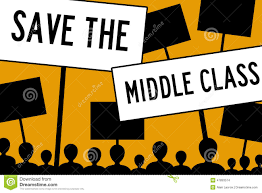 The argument is often raised about house prices falling.  Politicians run a mile from this question.  If you think about it, there are some winners.  For those selling to upgrade their accommodation, falling prices means the gap between what the sell for, and what they buy also reduces.  To take an example which is outside even remote possibilities, if house prices halved, someone selling their $1m home to buy a $2m home, would sell for $500k to buy a $1m home.  Instead of paying out an extra $1m they only pay out an extra $500k   The ones who would loose most are investors.  Those who borrow to invest and expect to make a profit when they sell, not get back into the market.