A comment from a journalist got me thinking.  It was about the Nick Xenophon Party.  The comment was “If we don’t know your policies, how can we vote for you?”

I started thinking about the reason for a minor party developing their own policies.  What is the purpose?  Their party will never have the numbers to be able to implement those policies.  Maybe one or two may get accepted as a trade-off if they have the balance of power, but the bulk of their policies will never see the light of day.  Might as well promise “free beer”. 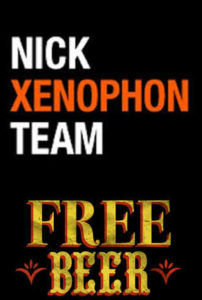 So why vote for a minor party?  If they don’t have policies that will be implemented, are we voting for a “failure to launch”?  Are we casting a vote as a protest against the Labor and Liberal?  Do we care that our vote has no real impact in any sense of getting things done.

I have a different view.  I believe the purpose of a minor party was best summed up by the late Don Dunstan.  To keep the bastards honest.  A minor party can speak out against the common direction of the Coles /Woolworths of politics.  It can shine a light on dodgy deals.  It can point out the complexity in legislation that only someone on the inside can see.  It can stir the pot on issues both major parties would rather leave out of sight.

So does the Nick Xenophon party need detailed policies, or do we just trust in their decency?  Do we need to know what sort of deficit their budget will bring in four years, or would we rather trust that NXT will point the finger at wasteful spending?

If we are to vote for a minor party, we are doing it because we see the need for a “checks and balances” party.  One that will alert us to details we might easily miss unless we were on the floor of parliament every day.  We are voting for them because we have more trust in the minor party than in the major parties.  To decide if they warrant our support, the main criteria should not be their policies.  It should be their past record.  Have they previously stood up for what we believe in?   Do their views support what we believe?  This is the true reason we decide to give them our vote.

Both majors talk of not wanting to form an alliance with minor parties.  Why would they, unless they had to.  Yet Julia Gillard almost made it work with the Windsor/Oakshot/Katter arrangement.

Many overseas countries form alliances and work in harmony.  Politicians even move between minor and major parties.  There is no reason it cannot happen in Australia.  Of course the major parties cringe when it is mentioned.  Easier for them if they are all in the same party, and are herded down the same path.

Yet there is an alliance between parties people tend to overlook.  The Liberal National Party alliance.  It has been in place for decades and generally works for both.  Sometimes there are clashes of values but it is always going to happen between two groups – one representing the city and one the country.  Would the world stop revolving if we had a Labor Green alliance, or a Labor NXT alliance.? Over the last decade, Labor has lost many votes from the left leaning section of the party to the Greens.  Would it not make sense to have these people rejoin the party?

So minor parties do have a role to play.  A full suite of policies is not as important as understanding the perspective of the individuals.  Being able to trust them to represent our perspective.  Who knows, one day they may find themselves in a position to form an alliance with the ruling party.